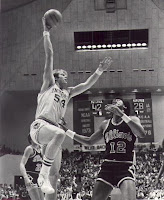 The greatest sporting event in the history of mankind except for maybe the World Cup or what have you is just about upon us!

It's NCAA Tournament time, and just like last year we shall determine who among us is the literary bracket picking champion OF THEM ALL.

Last year, Jody-Feldman was a UConn victory away from winning the ENTIRE multi-million person ESPN challenge, but ultimately it was Jared who came away victorious.

Who will win this time?

Here's how it works: You'll fill out your NCAA bracket online by picking the winners of all the games. And I'm offering a better prize this year: The winner with the most points at the end of the NCAA tournament will win their choice of a free partial critique or a book from one of my clients.

Here's how to enter:

1. Go to the front page of the ESPN tournament challenge: http://games.espn.go.com/tcmen/frontpage

3. If you have an ESPN username and password you can log in when you submit your picks, otherwise you may need to create a new user ID and password. But don't worry, it's not onerous and you can decline to receive updates in case you're spam conscious.

4. Hover over the link that says "My Groups" and then click "Create or Join a Group"

Then you're all set! You can make changes to your bracket by clicking on it until it locks on Thursday.

Please limit yourself to one entry

This year all updates and trash talking and "I don't believe what I just saw!!"s will be conducted right here in this thread
Oh, and you don't have to know anything about basketball to participate. In fact, it's probably an asset.

Photo by Rick Dikeman via a Creative Commons license

by Wendy Qualls
Does this mean I'll have to actually watch the games? :-)

by jezzell19
Wofford for the win!!!

by Susan Quinn
What do you get, Nathan, if you win? Besides supreme bragging rights? And it must break your heart that the Lakers aren't even in the bracket. As an ex-Bruin, I was bummed I couldn't at least have one sentimental favorite.

by charlotte49ers
Woot! This is my kind of contest!

Speaking of basketball, just found out my husbands old coach got fired today. Man, that is such a tough profession (college coaching, I mean).

by miahayson
OMG, whilst I have the intention of joining in I have been truly stumped, for the moment, by the bracket ESPN page.... Forgive me, I'm British and kind of a technophob, but what am I picking? Like all of the results for all of the games this tournament? Gosh, this could take a while.

Hmmm, help would be appreciated :~)

Plus, trash talking - how does that work? Quickly, somebody educate me!

by miahayson
Oh, it's ok. I muddled through and chose the teams that sounded the *prettiest*... Some info on the basic concept of this game would still be much appreciated though :~)

miahayson wrote:Oh, it's ok. I muddled through and chose the teams that sounded the *prettiest*... Some info on the basic concept of this game would still be much appreciated though :~)

You are definitely going to win.

The basic gist is that there's a 64 team field, and everyone tries to pick who is going to win. Die-hards follow college basketball all year just so they will be better at picking their brackets. The only problem is that they inevitably lose to the people who don't know the teams and have their own system for picking. Upsets happen all the time and throw everything out of whack.

Oh - and there's great basketball being played too!

by veela-valoom
So I get to talk basketball with fellow-writers? Sounds fun!

Huge University of Kentucky fan. Love our story this year, coming from an NIT with a drunken coach to NCAA #1 seed in only 1 year. It's been a fun ride with great characters, drama filled games (just watch the shot that sent us into overtime with Mississippi state) and so much excitement.

Not sure how I'll do my bracket (or if I have the guts too). Don't want to jinx anybody.

by mmcdonald64
So, now that we've made our picks, we don't have to do anything more, right? I mean, it's not like Fantasy Football where you have to keep going back every week, I hope. I was doing great in my son's fantasy football league, until I forgot to make my picks one week. And then again, another week.

Oh, speaking of basketball, the local school is ranked first in the state of Illinois and my husband has been their photographer the last two seasons. They have a McDonald's All American on the team. Maybe the kid will become a pro and my dh will have all these photos of the kid when he played highschool ball.

by tiff76
Rock Chalk Jayhawk all the way!

by SpamFromJapan
I've entered my bracket!

Confession: I had to check Wikipedia to find out what kind of scores are normal in basketball.

by veela-valoom
Random question: Does anyone else enjoy the stories in basketball?

For example the cast of character of the Kentucky squad:
Patrick Patterson could have gone in the first round of last years draft. Stuck around because graduating college was more important to him and his family than being a millionaire. Risked a career for his degree and for a chance to play for the title.

DeMarcus Cousins Either the most beloved or most hated Wildcat depending on your perspective. Came in with a reputed attitude problem. A lot of people were skeptical. With a sense of humor that is slightly inappropriate, a sly grin and major basketball talent is the most popular player on the Kentucky team (though the outside world is obsessed with John Wall). Everyone tries to rile him up, refs always like to review his plays, but when he got racial texts from very badly behaved MSU fans (hundreds of them) he laughed it off and stole the game from them...twice.

John Wall The most heralded of UK recruits, widely regarded as the #1 NBA draft pick. Has basketball moves that I've never seen before. However to break stereotype he's also got the highest GPA on the team (3.8 or something) and Coach says he would like to stay in college (even though we all know that won't actually happen).

Perry Stevenson Former starter, looks like a stretched out bean pole. By opposing slightly racist fans has been referred to as looking Ethiopian because he's so skinny. Supposedly the drunken coach we had last year forced Perry to eat pop-tarts in the locker room because he was so skinny. Rarely comes off a bench but has a very positive attitude considering he could have NBA level talent with some work.

Sorry for long post. I was just curious if anyone else thinks like this (and loves the game too).

by Matthew MacNish
Bracketology is so much fun! Personally I pick based on research and some basic knowledge of the team's success from the current season - except for a few upsets based on my favorite schools or places I have lived - teams I like essentially. As great as that sounds the fun part about March Madness is that last year I got beat in my pool by my best friend's wife. She picks based on how much she like the colors of the uniforms and how cute the school mascot sounds. Weird Science.

by Bryan Russell/Ink
Which one of you folk is gonna come in second?

(Okay, I cribbed that from Larry Bird. Seemed fitting, though. I bet that guy still wakes up dreaming about that loss to Michigan State...)
All times are UTC-04:00
Page 1 of 9